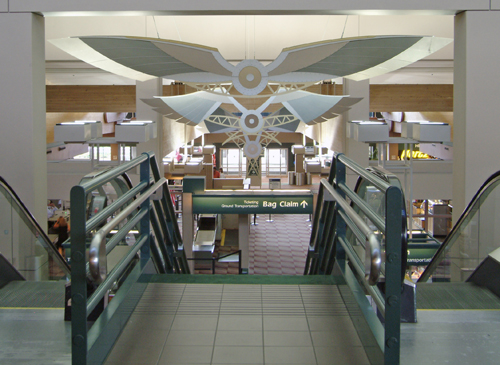 The Eugene Airport continues setting records with the number of passengers using its services in April. Almost 76,000 travelers used the airport and it is 6.34% more than in April last year when over 62,000 people traveled through it.

There are several reasons the airport is getting more and more popular. A good economy situation and the flights to San Jose, CA, that started in fall last year, contributed to increasing passengers activity. Also the terminals have been improved and that made the security lines shorter attracted more travelers to the airport.

The number of the travelers going through the Eugene Airport keeps increasing, and Tim Doll, airport Director, says that everything is being done to improve passengers’ experience, and local economy is helping the positive trend.

Also there have been three sport events, such the Oregon Relays, the Eugene Marathon and the Big O Roller derby tournament, in the end of April and the beginning of May attracted many people to the city and they used airlines to get to Eugene.

As for airlines, Alaska Airlines got an increase of 18% since April last year. Also, 14% more passengers traveled from Alaska to Eugene comparing to April 2015.

Taxpayers in the Pacific Northwest will Receive $1.9 Billion in Kicker Credit