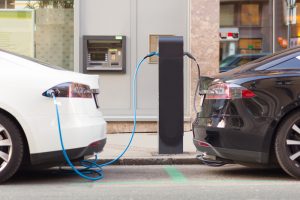 A Portland-based man, Matt Teske, has addressed some of the issues that come with owning an electric vehicle, which is why he created Chargeway.

Chargeway is a structure of graphics about electric car charging that basically makes it easy to read and understand for people who own and drive electric vehicles.

Teske is a graphic designer, marketing expert, and an electric car advocate. He claims that a lot of electric car owners are usually confused and have a hard time absorbing all the information they need to know about their cars.

The electric car market is not doing as well as it’s supposed to and that’s because both the sellers and buyers are not keeping up with all the new updates of electric vehicles since it is a lot to absorb.

It’s the fact that not everyone has become familiar with these cars, so they choose to stick to what they know.

However, with Teske’s new creation, Chargeway, it will be much easier for people to know everything they need to about their electric vehicle.

He has organized all the information in difference colors and numbers to simplify everything for buyers and owners.

Even though engineers understand and know everything about electric cars better than most people, regular buyers and owners do not.

With his system, sellers and consumers can now understand everything very quickly which will help them make a decision faster.

Chargeway is also an app that can be downloaded on your phone for convenience. With it, electric car drivers will be able to locate charging stations around the city for their cars, without knowing the terminology or ratings of the different charging criteria.

Sales representatives can now understand “electric fuel” better to explain the charging of these cars to consumers with no hesitation.

Companies can now also explain the difference between liquid hydrocarbons and plug electricity for vehicles.

Charging networks will be able to use the labeling system that consumers will use to understand electric-car charging easier than ever.

According to Green Car Reports, Teske’s system is receiving lots of attention from investors. Oregon’s DOT will also start using Chargeway later this year as well.

He has created the ultimate solution to get people to understand and purchase electric cars.

Surplus and Pain from Trump Tax Plan in Oregon

Don’t let it rain on your Thanksgiving Day Parade…