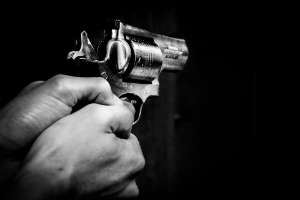 EUGENE, OR – Oregon District Attorney (DA) has ruled on a case that resulted in the fatality of a middle-school parent. Thus, the two police officers involved in this tumult are “legally justified” in their actions.

Shortly after the officers asked this parent, Charles Landeros, to leave school grounds during a custody disagreement, he resisted. Unfortunately, this resulted in the man’s death. The shooting occurred on school grounds, Cascade Middle School, and the DA claimed that it was in the defense of the officers themselves and others on the premises.

Interestingly, Landeros wears a “smash the patriarchy” shirt during the debacle. Some people have pointed this out as an indication of predetermined violence.

Unfortunately, as was obvious within the bodycam video, the victim had no regard for the officers’ lives.

After the resistance to taking Landeros outside, police attempted to put the man under arrest.  Supporting him against a brick wall, the two officers attempted to handcuff the man but failed. In this skirmish, Landeros had gotten away from the wall and reached for a handgun tucked in his waistband. Then, while wrestling him to the ground, Landeros fired multiple shots toward the two officers. One officer, Officer Tim, returned fire with a single shot that struck Landeros in the head.

Interestingly, Landeros was a concealed handgun licensed holder. Also, the gun was legally purchased. Although, the gun was loaded with a large number of rounds, which wasn’t necessary.

The DA claims that Timm saved the life himself, his partner, and the children at the school. Therefore, justifying the use of deadly force.

Eugene Springfield Fire Will Release An App to get Prompt Alerts