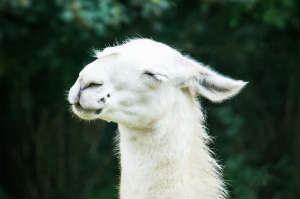 PORTLAND, OR – Caesar, a public figure in Oregon, is a no drama llama. Although, this weekend he didn’t live up to his name. On Sunday, the llama was spotted on Oregon’s rail service. A particular Reddit user posted a picture of Caesar and the scene went viral.

Oregon’s light rail service, or Metropolitan Area Express (MAX), doesn’t normally allow animals. Therefore, Caesar’s appearance was a shock. TriMet confirmed that the animal shouldn’t have been riding the rail. Even with valid fare or a Hop card, animals are not allowed to ride, a TriMet spokesperson confirme. Animals are only allowed to board if they are a service animal or are in an enclosed carrier. And Caesar, bigger than his owner, likely wouldn’t fit in one.

Caesar, the “no drama llama”, took the MAX train on Sunday while on his way to Wizard Con. But it wasn’t only Caesar. The group consisted of his social media coordinator and his handler.

Caesar is not a registered service animal. Although, on his Instagram, it states, “#llamactivist protecting and promoting civil rights for all & spreading llama love.” Clearly, by the photos on this Instagram page, that this llama is affectionate. It’s obvious he puts a smile on of the people he meets.

According to his website, Caesar is quite popular in Portland. The llama started off as a special guest at a Bill Burgess campaign and the “No Drama Llama” wave began. He can be hired for charities, businesses or personal events.

While Caesar was spotted on the bus, some found his visit on the bus delightful, while others reproached it. Social media was a space for the great debate, all the while it brought Caesar’s recognition up!

Finally, Caesar and his entourage apologized for the trouble and promised it wouldn’t happen again.

Pacific Highway Crash Left a Pedestrian in a Serious Condition