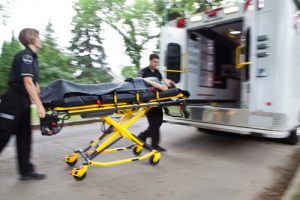 Eugene, OR – A dispatch was called in on Monday due to a stabbing. They approached the scene and found a man who had attempted self-immolation.

Local authorities issued a statement for commuters in the area for that time:

“Please avoid 5th Avenue from Seneca to Bailey Hill, and Market Street from 5th to 7th Avenue. Police responding to a reported stabbing in the area,” Eugene Police said at 9 a.m.

Self-immolation, by definition, is when and individual attempts to set themselves on fire. The man also had severe wounds to hits wrists.

“The man subsequently lit the tent on fire, and sustained burn injuries from the incident,” according to Eugene Police. “Police escorted the man to the medical unit, and he was transported to the hospital for treatment.”

It is unknown the reason why the man chose to commit self-immolation. Police found that a propane tank had been placed in the tent – open while the tent remained closed.

The individual is in the hospital and there is no indication as the identity of the man.

Suicide watches are in place throughout the city. While COVID-19 is putting a massive strain on the mental health of citizens, the results can be disastrous.

Many of these reports of suicide attempts come from individuals who are out of work. Currently losing their business, or scrambling to get by, the environment is under extensive stress.

“There are hotlines that many can call if they feel they are a harm to themselves,” says Rachel Chilton of Eugene.

Still, the impact of the current pandemic is continuing to worsen not only in the number of cases, but the economic disparity as well.

“Self-immolation is a terrible attempt. Some of the reasons why these people choose to end themselves can be helped and saved” says local citizens Kathy Levallier. “We can fix these issues in a better way.”

Most Likely Human-Caused Wildfire Forces Evacuations in Dufur, OR

PacifiCorp Tells Their Employees to Return to the Office Fast